Posted at 14:16h in Uncategorized by eighty6 0 Comments
0 Likes 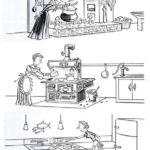 How the BBQ all began!!!

Contrary to mythology, barbecue was not an American invention. Barbecue is older than homo sapiens and anthropologists even think that it was mastery of fire that permanently altered our evolutionary path and it is this primeval link that makes us still love cooking over flame.

Evolution favored traits that enhanced the ability of these early homonids to hunt and eat cooked meat: Smaller hips and flatter feet for running speed, better hand articulation, communication skills, and smaller jaws. Eventually they learned to domesticate dogs to help with the hunt, and then they learned to herd and husband the animals that tasted best. The family circle and tribal structure evolved so that men became hunters and women became cooks. Ergo, the first pitmasters were probably women.

We may not have invented it, but we perfected it!!